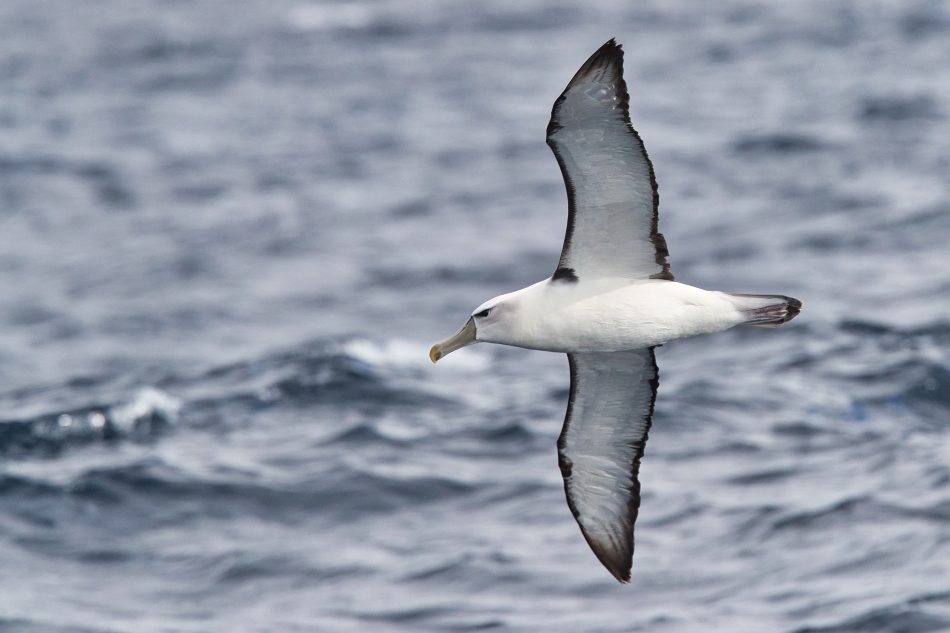 I was fortunate enough to get another chance to go on the Port Fairy Pelagic boat trip, run by Birdswing Birding and Wildlife Tours (see here for previous trip report from Feb 2015).

As per the normal format, the boat departed at 7am which was more or less just after dawn for the 3 hour trip out pass the continental shelf. The weather started off overcast with showers about, but fortunately none overhead. It didn’t take too long before we started getting sightings of distant albatross in the gloom…

The trip out was largely uneventful but the increase in bird activity was an obvious sign of when we had arrived at deeper water, not least the albatross flashing past the moving boat.

Sea anchor and burley deployed, it all got pretty busy with large numbers of birds around the boat. The most common bird at the site was the rather stern looking Campbell’s albatross (at least 50 birds around).

Time at the site and proximity of the birds allowed good comparison of the subtle differences between the species, like those between the Black-Browed and Campbell’s albatross.

After the Campbell’s the next in terms of numbers was the Shy Albatross, with roughly 20-30 individuals seen:

Less frequent but fairly constant visitors around the boat were 3-4 individuals of Black-Browed Albatross and Yellow-Nosed Indian Albatross:

After the excitement of the albatross species, there was also a good opportunity to get close views of the 3 storm petrel species that were seen on the trip. The most numerous were the White-Faced Storm Petrels (c 50 individuals:

Much less frequent were the Wilson’s Storm Petrels (c20):

And finally the Grey-Backed Storm Petrel (only 3-4 seen):

Another of the smaller groups of seas birds seen was the prion family and they are notoriously difficult to tell the species apart. Most numerous (and easiest to identify) were the Fairy prions:

Fly past of a ‘great’ albatross species saw the excitement levels rise and it soon circled back enabling it to be identified as the spectacular ‘Wandering’ albatross:

A Wandering albatross also came in close to the boat to take part in the free buffet allowing a good opportunity to see its true size compared to the more numerous Campbell’s albatross:

The large number of birds around the boat made spotting any different species or new arrivals a little tricky. One new arrival that was seen by everyone was a stunning Buller’s albatross:

The weather was pretty good for the trip back with most of the cloud having cleared and the sunny conditions affording good views of the albatross following in our boats wake:

We arrived back in dock dead on 4pm as planned after a very successful voyage!

Final Reflections: There were significantly more birds seen on this trip in terms of numbers compared to my previous trip in Feb 2015 but what was most noticeable was the difference in mix. This time round there were significantly more albatross and prions, whereas last time the shearwaters were most noticeable around the boat. Not sure what can be read into just two observations other than you never quite know what you are going to see….which I guess is part of the fun!

Seen by some on the boat but not positively identified by me (yet!): Royal Albatross, Salvin’s Albatross, Antarctic Prion.