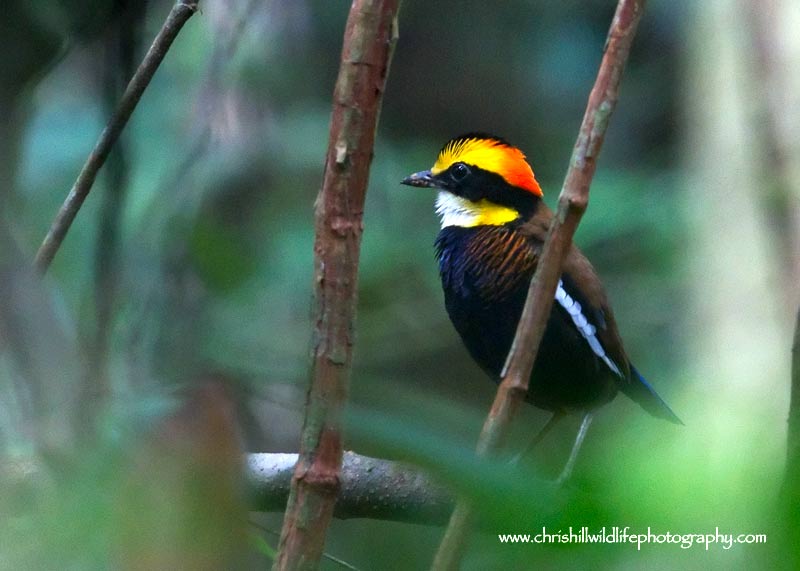 I visited the Sungai Relau (Merapoh) part of Taman Negara for the second time in early October.  As I’d spent the previous night near Bukit Tinggi, I arrived at around 3:30pm after leaving there just after midday.  As before, I hadn’t made any prior arrangements but had no issue getting accommodation at the Park HQ.

I dropped off my stuff and managed to get in a couple of hours birding before dusk.  I quickly tried the trail where I saw the Banded Pitta on my previous visit and managed a fleeting glimpse – a good sign as I was keen to try and improve on my shots of that species.

The day ended well after stopping on the road to watch a pair of Black and Yellow Broadbills, a flock of White Crowned Hornbills came into view and sat calling for about 15 minutes.  If that wasn’t enough, a noisy flock of five Great Slaty Woodpeckers then gave a nice flypast – a great end to my first day back at Taman Negara! 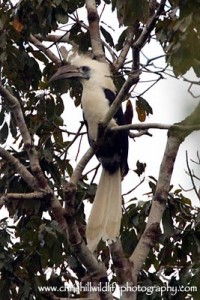 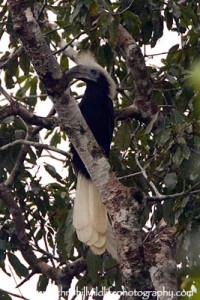 Out at 5:30am to try for the Large Frogmouth from the bridge.  It was calling but didn’t come close enough for a view – maybe tomorrow.  I also heard a Brown Wood Owl calling from the forest to the right of the bridge but it was too far in and fell silent as dawn started to break.  A Hill Myna was my first bird for the day, calling from a dead tree top on the edge of the HQ – the only one seen all trip.

After a quick breakfast, I headed down the road with a fellow birdwatcher and photographer Yann Muzika, whom I had the pleasure of meeting that morning.  The road was very productive with sulking babblers, nondescript bulbuls and mixed bird flocks keeping us busy all morning.

Returning to camp, I quickly tried the Negeram trail along the river on the HQ side, following a tip from Yann that he saw a Diard’s Trogon there the day before. No Diard’s Trogon for me but I did pick up a very unfriendly Scarlet Rumped Trogon, White Crowned Hornbills in the mid story and a beautiful male Red Bearded Bee-eater.

I also spotted a charming Earless Agamid which was no bigger than my little finger.  It was quite unperturbed by my presence and seemed quite keen to pursue a career as a model!

The afternoon was spent on the various trails off the first 2km of the road looking for the pittas.  Yann and I split up at this stage to improve our chances – he had great success with the Garnet Pitta, whereas I got decent views of a male Malaysian Banded!

Along the way, we also had plenty of luck with the bird waves.  The best of which for me yielded great views of a displaying Scarlet Rumped Trogon, Dark Throated Oriole (male), Sultan Tit, and Black Naped Monarch. 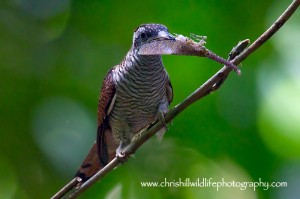 I also bumped into a very confiding Banded Bay Cuckoo which was sat in the forest understory before pouncing on and devouring an unfortunate lantern bug.

I met back up with Yann late in the afternoon and we started a slow wander back towards the bridge.  At about 6:30pm, there was a crashing in a tree less than 15m away from us – too big to be a squirrel and too close to us for it to be a primate – unbelievably it was a sun bear!  It foraged parallel to the road for about 10 minutes until we had to leave it when it got too dark.  It appeared totally unconcerned by our presence although it was aware we were there.

We spotlighted the oil palm plantations on the way to dinner spotting a few Malay Civets and Wild Boar but no luck with the Leopard cat.   Before turning in, we had a quick go for the Large Frogmouth at the bridge which was unresponsive – mostly likely due to the fact that a pair of Buffy Fish Owls came in and perched right above the bridge! 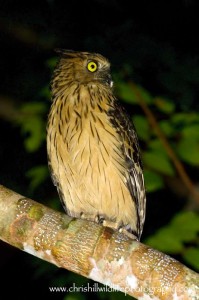 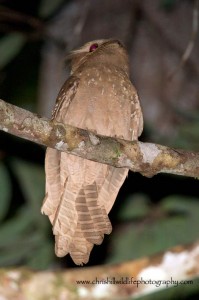 An 5am start to try for the frogmouth before trying to walk the road as far as we could in the dark to get further into the heart of the park.  After a good hour of waiting and trying for the frogmouth, we finally had success.

The birding that morning was good, particularly for babblers – which Yann picked up well – and woodpeckers.  Helmeted and Rhinoceros Hornbills were also calling throughout the day. 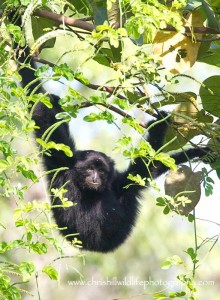 Close to camp on our return we sat watching a family of Siamangs feeding on flowers in a tree close to the road.

Back at camp, I picked up a Brown Shrike, Crested Serpent Eagle, Grey Breasted Spiderhunter and Plain Sunbird.

The day was heating up when Yann left for Kuala Tahan and I headed back into the forest to try and improve on my pitta shots.  The forest was still and hot and appeared completely lifeless.  No birds were calling at all, even from the areas where they had been calling well the day before.  The inevitable came in the form of a massive thunderstorm which broke at around 4:30pm with torrential rain for the next 2 hours.  It eased slightly at 6:30pm and I headed out for a last bit of birding in the murky gloom.   The effects of the rain were very apparent from the state of the now swollen river – undoubtably what had disturbed an overflying Lesser Fish Eagle. 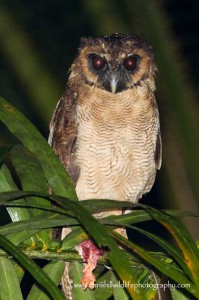 After the slightly frustrating afternoon, I had an extended spotlighting session in the oil palm plantation which was particularly rewarding with a Brown Wood Owl (which stuck around long enough to get a few shots after fumbling with the camera and spotlight), more Malay Civets a larger Masked Palm Civet, WIld Boar (c20) and a Leopard Cat!

My last morning and only a few hours to try and get a passable shot of the Garnet Pitta.  I birded the road until the light improved before heading into the forest at the spot where Yann had good views of the Garnet Pitta on the previous day.  The bird started calling as I approached the spot and I got a view but ran out of time to get into position for a decent photograph.  I reluctantly left to pack up and head for KLIA (return trip took about 4.5 hours).