Taman Negara is the largest and probably most famous National Park in Malaysia, covering 4,343 square kilometers of what is described as “the world’s oldest tropical rainforest”.

For the nature lover, this means a whole lot of opportunities to see SE Asia’s lowland wildlife.  It also unfortunately means a lot of leeches, periods of seeing nothing and a lot of perspiration!

The 2 main entrances to Taman Negara are at Kuala Tahan and Sungai Relau (also refered too as the Merapoh entrance).  I visited the Sungai Relau site in July and October 2012, having visited Kuala Tahan in 2007.

Most visitors go to Kuala Tahan and there is a lot of information on the website about this option.  Sungai Relau on the otherhand is significantly less visited and I found very little information on the internet when I was originally researching my trips.

Sungai Relau is accessed from the E8 near Merapoh which is around 4-6 hour drive from KLIA depending on traffic and road conditions.  Once off the Expressway, the journey is largely on single carriage road which can be heavily used by lorries and slow moving traffic.  The National Park is fairly well signposted off the main road – look out for the signs when you start seeing a lot of roadside stalls and restaurants near Merapoh. 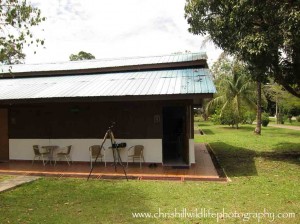 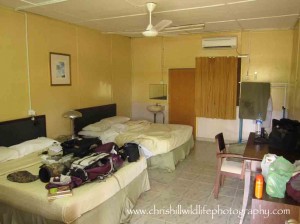 There is good but basic accommodation at the park headquarters in the form of aircon rooms, non-aircon rooms and also dormitories.  The rooms can either have ‘Western’ or ‘Asian’ style toilets but a key tip is bring your own toilet paper – none is provided!   When you arrive at the HQ, obtain your entry permit (and camera licence, if required) from the first large building on the left for a nominal fee before going through the gates in front of you where you can sign in for the accommodation at a wooden kiosk.

There is no provision for food at the HQ so you either need to bring your own or head back to the roadside stalls or restaurants on the main road. 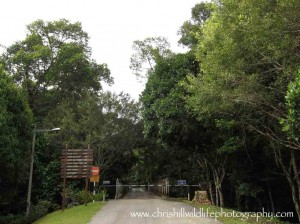 The road continues through the camp before crossing a bridge (which is locked at night) and continues as a single track for 14km to the heart of the park.  Private vehicles are not allowed over the bridge.

There have only been a handful of visitors when I have visited and unless you are particularly unlucky, I would imagine that you will usually have the trails to yourself.

I have found the main wildlife watching sites to be: 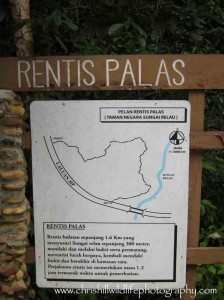 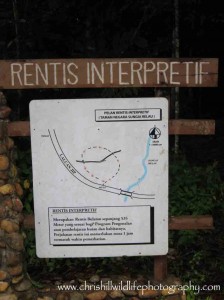 (a)  Walking the two trails which branch off the road on the right hand side within the first 50m of the bridge.  The first (Rentis Palas) is a longer loop which travels along the river before heading up over a ridge and rejoining the road.  The second (Rentis Interpretif) is a smaller loop which starts and finishes from the same spot.  The shorter loop can be difficult to follow if there has been a lot of rain as the far end of the trail becomes boggy and the trail can be easily lost.

Both trails can be very productive – I had 5 separate sightings of the Garnet pitta on my first visit by slowly walking these trails.

(b)  Following the ‘main’ road further into the park.  I have done this once on each visit starting early in the morning both times.  The road gradually rises with a number of small steeper inclines, passing a salt lick often frequented by elephants (rarely seen but plenty of evidence of their visits). 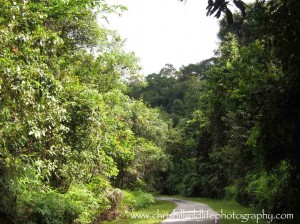 As this route also affords more open views of the forest, it is also usually easier to see primates such as Dusky Langurs and Siamangs.    On the subject of open views, it is worth noting that whilst hornbills are well represented in the area, it is generally fairly hard to get decent views due to the absence of open view points.  Helmeted and Rhinoceros hornbills were both calling well on my last visit but not seen.

It is worth doing this walk for the ambiance and the possibility of what you may bump into (tigers have been photographed by camera traps on this road) but from a birdwatching perspective, I have always found the first 2km past the bridge to be most productive.

(c)  The Negeram Trail which follows the river to the left before you cross the bridge.  This trail keeps on the HQ side of the river and is a slightly more open habitat than the other side.  As a result, it is possible to see some slightly different species.  When I walked this trail, I got good views of a Red Bearded Bee-eater, Scarlet Rumped Trogon and White Crowned Hornbill.

(d)  Around the HQ grounds.  This area is worth a walk either first thing if you are waiting for the gate to open or during the middle of the day if you are back.  There may be fruiting trees which attract a range of fruit eaters like green broadbills, fairy bluebirds and bulbuls at dawn and the ornamental flowers attract sunbirds and spiderhunters during the day.  There are also resident Provost Squirrels which are attractive and entertaining!

(e)  The road back to Merapoh.  This road is well worth a drive at night spotlighting as there is a surprising amount of wildlife in the oil plantations.  I’ve seen a leopard cat on each visit, an owl, numerous civets and wild boar.  There is usually very little traffic on the road so it is possible to crawl along in the car spotlighting the plantation on either side.

The trail network is not as extensive as at Kuala Tahan and there are no options for river cruises at Merapoh.  However, the trails are less used and the possibility of seeing a lot of wildlife close to the HQ is high.

The main targets for most birdwatchers in Merapoh are usually the Garnet Pitta and the Large Frogmouth.  I have been lucky and had decent views of each on both visits.  However, I wouldn’t describe either as easy and both require some work. 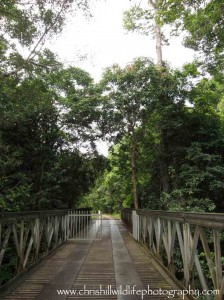 The known site for the Large Frogmouth is from the main bridge.  I’ve tried for this in the evening as well as pre-dawn but have only had success pre-dawn so it may necessitate an early start!  The standard approach is to play the call from the bridge and wait for it to respond and come in.  I found this to work well on my first visit but it was significantly less responsive on my second trip.  I got the impression that it may be getting used to ‘hoax calls’ from the bridge so if using playback, please be aware of the impact this could have on its behavior and try to limit as much as possible.

The Garnet Pitta appears to be fairly well distributed in the forest right after the bridge.  If heard calling close to the road, it is usually a case of finding a spot to enter the forest which will allow a slow and quiet approach.  If they are silent (as they were in July), it will be a case of slowly walking the trails and looking for movement on the forest floor ahead.  Don’t despair, as unlikely as this sounds, I also found this to be fairly reliable – maybe as the trails are less visited and the pittas are comfortable near them.  It was in July that I was fortunate enough to see both parents with a fledged youngster (which one of them fed).

Merapoh is also a good spot for the Malaysian Banded Pitta.  I have found this to be a lot more vocal than the Garnet pitta on the two times I have been there but probably more shy.  You will need to be very careful with any approach so as not to spook it before you see it.

The thing I love about this area though is that you really do get a sense that you could see anything there as it does feel relatively unspolit.  For example, when I was there with Yann, we were fortunate enough to see a sun bear which was foraging within about 10-15m of us!  I didnt manage to get a photo, partly as I didn’t want to gamble on the bear’s reaction to my flash going off at such close range but Yann managed to get a shot which is posted on his blog.